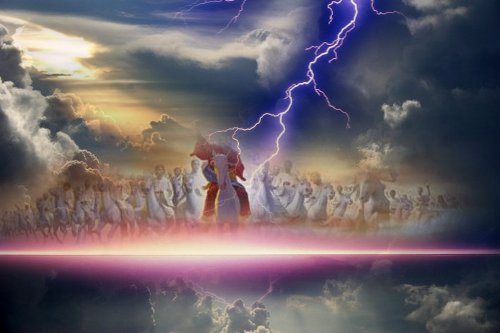 This page is currently being built.. thanks for being patient with us...

Below is a summary of what happens during the 1000 years after the saints are raptured into the City of God..

When Jesus appears the 2nd time in the clouds, He is brining His reward with Him. Revelation 22:12 And, behold, I come quickly; and my reward [is] with me, to give every man according as his work shall be.

Saints into New Jerusalem (Heaven, not on Earth):
1 Thess 4:16        For the Lord himself shall descend from heaven with a shout, with the voice of the archangel, and with the trump of God: and the dead in Christ shall rise first:
4:17       Then we which are alive [and] remain shall be caught up together with them in the clouds, to meet the Lord in the air: and so shall we ever be with the Lord.

Saints Judge and Reign:
Revelation 20:4 And I saw thrones, and they sat upon them, and judgment was given unto them: and [I saw] the souls of them that were beheaded for the witness of Jesus, and for the word of God, and which had not worshipped the beast, neither his image, neither had received [his] mark upon their foreheads, or in their hands; and they lived and reigned with Christ a thousand years.
Revelation 1:6    And hath made us kings and priests unto God and his Father; to him [be] glory and dominion for ever and ever. Amen.

This is what earth looks like during 1000 Years:
Earth is desolate: Isaiah 13:9 Behold, the day of the LORD cometh, cruel both with wrath and fierce anger, to lay the land desolate: and he shall destroy the sinners thereof out of it.  12:20    And the cities that are inhabited shall be laid waste, and the land shall be desolate; and ye shall know that I [am] the LORD.
Satan is bound: Revelation 20:2 And he laid hold on the dragon, that old serpent, which is the Devil, and Satan, and bound him a thousand years,  20:3           And cast him into the bottomless pit, and shut him up, and set a seal upon him, that he should deceive the nations no more, till the thousand years should be fulfilled: and after that he must be loosed a little season.

All humans put to sleep:
Revelation 20:5 But the rest of the dead lived not again until the thousand years were finished.