Nicholas Patula Lied About His Ordination


Isaiah 8:20 To the law and to the testimony: if they speak not according to this word, [it is] because [there is] no light in them.
if you have read the sdr church's link about us, please email us at craig@ssremnant.org
Watch Videos

Meet Nicholas patula below. beware, for if you come against him, you will be slandered like us and many others.

if you want to know where his church is located Notice the pagan catholic symbols on his walls of his home? Picture was taken 2011. click the picture to enlarge.

Since we have separated from the SDR church, there'd been a few questions regarding the sdr leader's ordination since no one, not even him really talks about it in the church. A few people have posted comments in youtube asking him about his ordination. SDR leader said, 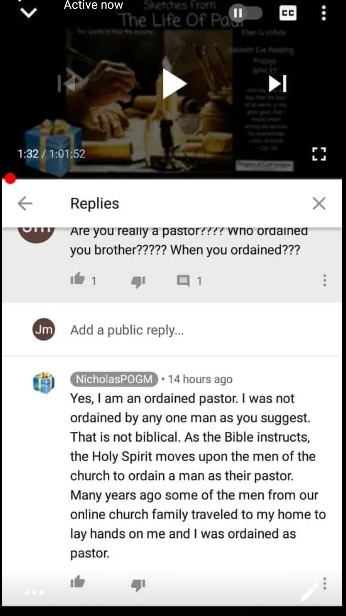 Take note, he never stated the exact year he was ordained. He just said "many years ago". Then in another youtube comment, he was asked the same question. This one he gave a clue as to when was he ordained. 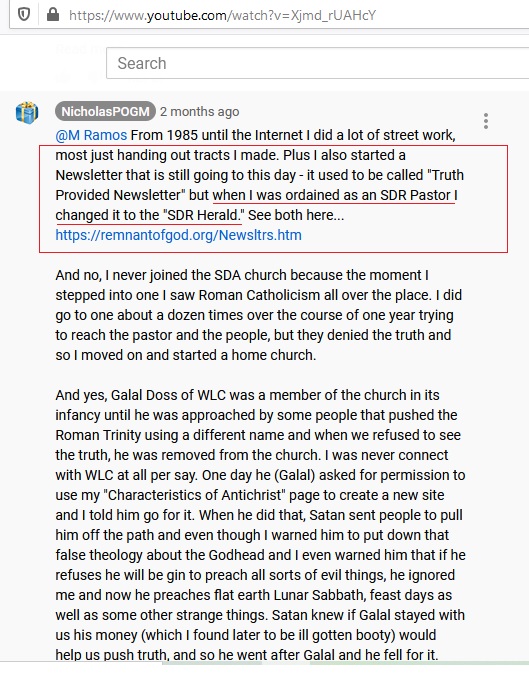 First he said that he started making newsletter named "Truth Provided Newsletter." Then when he was ordained as SDR Pastor, he changed it to "SDR Herald". Base on what he said, you can simply get the answer as to when was he ordained. His clue was he changed the TPNL name to SDR Herald.

Now, let us investigate when did SDR Herald come to existence. The first issue of SDR Herald will tell you exactly when it started. 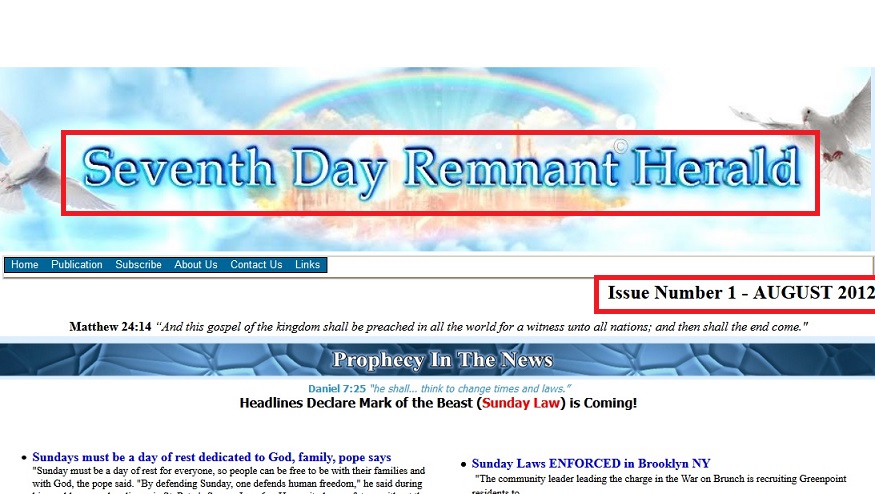 The first issue of SDR Herald is dated August 2012. Take note, the year is 2012. Actually this was named SDR Herald after the split in 2012. The other church name theirs SRVoice while the SDR church leader changed it to SDR Herald. But now the changing of the SDR Herald is actually associated with his ordination according to what he said in the youtube comment. So common sense tells us that SDR leader and pastor was ordained in 2012 when the name of the newsletter (Truth Provided Newletter) was changed to SDR Herald. Nothing is clearer than his own statement regarding his ordination.

Again, investigate for yourself and you can find nothing being discussed regarding ordination in his blogs of 2018 or the other old magazine of the former brethren from west coast. NONE about his ordination is being revealed. Ask him in public and there is never a precise answer infact he hinted that it is not important to really talk about it. He can also say he was ordained many years ago. Who can forget the year he was ordained is very strange. It is like you forget when you got married.

Many who have separated from the SDR church have asked the question but the statements that have been put out there in public do not match. But let me assure you, one thing is for sure and truthful. SDR leader was baptized in a home church in Indiana pastored by J. Laswell. From 2002 to 2003 he was a member and was ordained a "DEACON" and never ordained a pastor. He was disfellowshipped which I will not disclose as the reasons and such in respect to biblical jurisprudence and the request of Pastor Laswell and family which does not want to have any part with the sdr leader. They have stated that they have been free from this man and do not want any more trouble from him.

Furthermore, G. Doss of WLC was once part of the sdr church and still had no idea or information regarding sdr leader's ordination. T. Wellham who was also once a part of the SDR church but left and was slandered also had no idea regarding the ordination of the SDR leader Nicholas. For proof of what he said, email us.