Isaiah 8:20 To the law and to the testimony: if they speak not according to this word, [it is] because [there is] no light in them.
if you have read the sdr church's link about us, please email us at craig@ssremnant.org
Watch Videos

Meet Nicholas patula below. beware, for if you come against him, you will be slandered like us and many others.

if you want to know where his church is located Notice the pagan catholic symbols on his walls of his home? Picture was taken 2011. click the picture to enlarge.

We have a page that discusses the truth regarding the loud cry of the angel of Revelation 18 and the other voice that instructs God’s people to come out of Babylon. We have learned that the Revelation 18 angel echoes with a loud voice the messages of the 3 angels of Revelation 14. This message is to be proclaimed today while probation is still open.

We also know that the mouth of the dragon, beast and false prophet (Revelation 16:13) have agents today that are so crafty, speaking lies in hypocrisies (1 Timothy 4:2) through this 3 fold union and the 3 unclean spirits. Out of the mouth of these agents of lies they spread their nets to trap the sleeping souls who are not reading their Bibles. Apostasy is spreading everywhere today even in the so-called remnant churches who are only remnant by name but by doctrines and principles are not. The seventh day remnant church of Nicholas Patula is one of these professed Laodicean apostate churches who professed to be a remnant church yet turning the truth of God of Revelation 18 into a lie. And as a watchman in the vineyard of God, I have a clear duty to warn this world of the dangers of these so called ministers of righteousness yet inside are ravening wolves of Satan.

In presenting the 6th plague, the SDR leader Nicholas used a very truthful and beautiful quote from the prophetess sister Ellen White regarding the loud cry of Revelation 18, which we gave Biblical support as to all that happens before probation closes, but of course, the deceptive powers working through this sdr leader Nicholas is misapplying this truthful passage of the prophet EGW and purposely stirring up confusion to deceive the people. “When the earth is lighted with the glory of the angel of Revelation eighteen, the religious elements, good and evil, will awake from slumber, and the armies of the living God will take the field”.-- 7BC 983

“But Providence has a part to act in the battle of Armageddon. When the earth is lighted with the glory of the angel of Revelation eighteen, the religious elements, good and evil, will awake from slumber, and the armies of the living God will take the field”.-- 7BC 983

Looking closely, we know the truth about Revelation 18 angel and that it is the latter rain, the loud cry angel which gives power to proclaim the 3rd angel’s message, as it is all a repeat - to give God glory - Obey Him-put on the garments of righteousness and do the works of God, which this is a loud cry message that is to lighten the earth before probation closes - to come out of her my people and partake not of her sins. This is the end time harvest message that will separate the wheat from the tares before probation closes, yet this sdr church is proclaiming that during the 6th plague, this angel will lighten the earth with his glory and not until that time. This is false, unbiblical, un-preparing the people, causing them to sleep, causing them to look to another future event, just like the apostate SDA Church is doing today in telling the people that we are not to proclaim the three angel’s message until after Sunday laws. These are Jesuit tactics, spirits of devils working to cause division, confusion, and more apostasy in this remnant movement around the world. For these falsehoods are there to dumb down the people and to give Satan the foothold that he needs to make the individuals lives fall into more darkness. Proclaiming that the armies will wake up from slumber and take the field in the sixth plague is a lie, it is a trap, and it is a false prophecy that is coming from a self proclaimed minster of truth who has now been revealed to be a wolf in sheep's clothing. The loud cry tells us to come out of the sins of apostasy before plague one drops and if you do not you will receive the mark of the beast.

Revelation 16:2 - And the first went, and poured out his vial upon the earth; and there fell a noisome and grievous sore upon the men which had the mark of the beast, and [upon] them which worshipped his image.

We are to lighten the earth today and not after plague one comes when it is too late. The loud cry has been going forward and it will continue to do its work by enlightening this entire world that we must fear God and worship Him who made heaven and earth. And if we do this work we will live this work and the world will see it in our life's sermon. The righteousness of Christ will be seen on our garments. This loud cry to come out of her is today. It is even too late for a loud cry message in the 1st plague, how much more in the 6th plague? Our end time latter rain loud cry message is what brings on Sunday laws. This message is what wakes up the people and stirs up the enemy to kill us and then when they kill us and do their evil work against us, then when all cases have been decided, the wicked have received the mark of the beast and took their stand in the battle with Satan, thus the seven last plagues will pour out upon them. The harvest message of Rev 18 is now and not in the 6th plague.

The religious elements of good and evil must AWAKE today and now, before probation closes and not after it closes. Everyone must decide today who they will love and worship, and when Sunday laws come, the earth would have already understood the truth, accept it or reject it, and those who reject it will be cast into the great winepress of God’s wrath (Revelation 14:13-20). Today the religious elements are waking up and thus you see the battle between truth and error happening and the wicked ones are moving fast to bring about Sunday laws. They are also using the Jesuits that are planted in these professed Churches who have so much light preaching lies, time setting and causing the people to look into another direction and again, putting them to sleep.

Remember, the watching and keeping of our garments mentioned in Revelation 16:15 - the battle of Armageddon must be done today before probation closes and not during the plagues.

So, by sdr proclaiming this message today, they are showing forth the same spirit of Laodicea who says you can sleep today, do a little folding of the hands and slumber because soon the latter rain will come and then we will really work, and then it won’t happen until the 6th plague. We must take the battle field today and awake the world. The sooner we do this, the sooner the test will come and the probation of this world will close. These ministries today are proclaiming the same work of the five foolish virgins and many are not seeing it. Soon they will all get caught off guard and be caught sleeping in their own delusion and trap they set for themselves. Because they have lived a lie, they are believing a lie, and because they love the lies, they will be found left outside the marriage supper, having no oil, which is no Holy Spirit because they rejected Him and blasphemed Him through their evil works and unbelief’s. If we want to reject the Self Existing Holy Spirit of the Godhead family, you see why many don't even know their Saviour because they reject the very help and this Messenger brings to enlighten us of the WORD of GOD. The Holy Spirit will guide us into all the truths of the Word of God. He will lighten our lives and give power to proclaim the works of Christ. John 16:13 - Howbeit when he, the Spirit of truth, is come, he will guide you into all truth: for he shall not speak of himself; but whatsoever he shall hear, [that] shall he speak: and he will show you things to come.

When our High Priest - The Son of ABBA leaves the Most Holy place and has commanded the first angel to pour out his vial upon the earth where those who were not able to wake up from spiritual slumber will receive the noisome and grievous sore (Revelation 16:2). Those who are sleeping cannot anymore awake when plague 1 falls how much more when plague 6 falls wherein the wicked are described as dried up, without moisture, helpless, ineffective and dehydrated and ripened to be burnt even more at the brightness of our Lord’s coming. The 6th plague is a punishment to the wicked for the global unity they had before probation closes in their one mind Sunday-Sun-Baal worship system where both good and evil had taken the field and were stirred up by the messages of truth, by the 3 angels message and by the 3 unclean spirits. The Holy Spirit gives the rain and power to glorify God in our lives and the unholy spirits of the dragon gives his three fold union power to work. This is the battle that is happening today and not in the 6th plague.  During the plagues, especially the 6th plague their global unity is drying up and will be dried up even more as the cup of the sixth plague is poured out. In the time of the sixth plague, the wicked are so dried up and hurting, they wishing death would come upon them, but death will flee from them. It is really that simple to understand the purpose of the plagues which is all a direct result as to what the heathen did to us before probation closes, God gives it back to them in the seven last plagues (Obadiah 1:15; Revelation 18:6; Revelation 16). 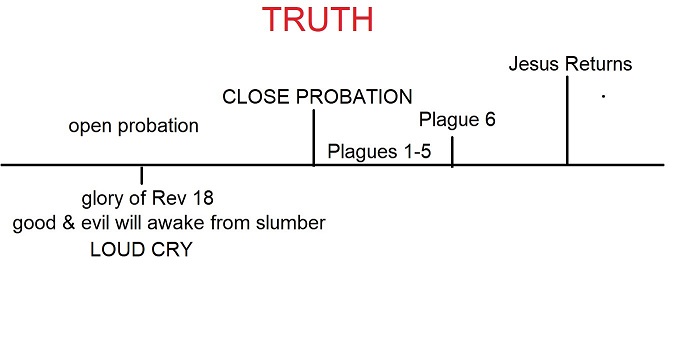 The lie of the Seventh Day Remnant church is this, 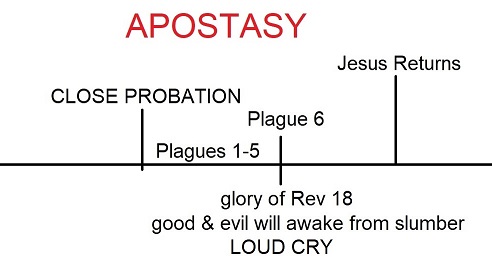 If you are half awake half asleep or fully asleep, you will never notice this deception. But if you are fully awake, you can clearly see how the SDR church turned the truth of Revelation 18 into a lie by placing it in the wrong place of the prophetic timeline.

This is the reason why we have to pay attention. Let us not just accept what man says but investigate like the Bereans whether what man is saying is proven by the Bible or not. How can the glory of Revelation 18 be placed during the plagues when this angel’s loud cry message is to sound to wake up those who are asleep. The waking up must happen before probation closes and not after it closes.

So, in closing; the loud cry of the angel of Revelation 18 is echoing today and the earth is being lighted with the glory of this angel TODAY and the good and evil around us are waking up TODAY. The loud cry and the waking up of the people will stop when probation has closed and everyone's case has decided for heaven or for hell. Let none of God’s honest children be deceived by these wolves in sheep’s clothing proclaiming the message of Rev 18 will happen in the 6th plague or indirectly saying the loud cry of rev 18 will happen during the 6th plague. When you find your church preaching this false doctrine, your Christian duty is to listen to the loud cry of the voice from heaven of Rev 18:4, COME OUT of HER.