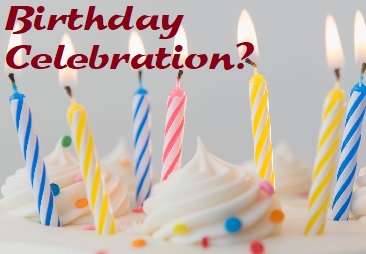 Many people in the world today are deceived by Satan through various kinds of celebrations. The ways of the heathen are many and those who are not searching for truth will fall into these many deceptions. One of the most popular celebrations is the BITHDAY! But where does this celebation come from?

Regarding birthday celebrations, there are only 3 records found in the Bible. These are the people who celebrated their birthdays but the problem is, these people are not men of God.

2. sons of Job - Job 1:4-5 And his sons went and feasted [in their] houses, every one his day; and sent and called for their three sisters to eat and to drink with them. And it was so, when the days of [their] feasting were gone about, that Job sent and sanctified them, and rose up early in the morning, and offered burnt offerings [according] to the number of them all: for Job said, It may be that my sons have sinned, and cursed God in their hearts. Thus did Job continually.

3. Herod - Matthew 14:6-10 But when Herod's birthday was kept, the daughter of Herodias danced before them, and pleased Herod. Whereupon he promised with an oath to give her whatsoever she would ask. And she, being before instructed of her mother, said, Give me here John Baptist's head in a charger. And the king was sorry: nevertheless for the oath's sake, and them which sat with him at meat, he commanded [it] to be given [her]. And he sent, and beheaded John in the prison.

If you notice, each birthday celebation of Herod and Pharaoh, a life was taken. Someone was killed. Also if you notice, there festivities involved. Banqueting, eating and drinking. That is typical in a birthday celebration like any other kinds of celebration in this world. People spend their money on eating, drinking and merry-making that glorifies themselves.

Let us also dig into some birthday rituals that are of pagan origin: 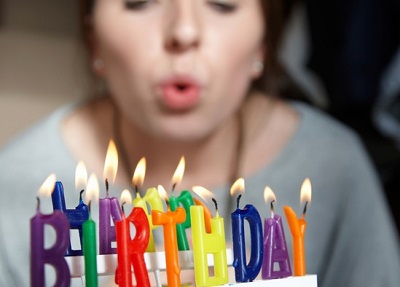 This is a very common birthday rituals. According to pagans, the smoke from blowing the candles is the prayer that will ascend into the sky for the gods to hear. That is why before blowing the candles, a silent wish or prayer is made by the celebrant then he blows the candles and so the smoke carries the prayers into the gods somewhere in the sky. In ancient Greece, people would bring the goddess of the Moon Artemis cakes decorated with candles to honour her birthday. Also, the smoke from the candles was believed to ward off evil so that the celebrant's life will be safe from dangers and evils. 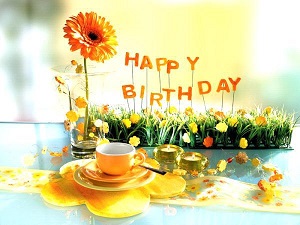 “Originally the idea [of birthday greetings and wishes for happiness] was rooted in magic. The working of spells for good and evil is the chief usage of witchcraft. One is especially susceptible to such spells on his birthday, as one’s personal spirits are about at that time. Dreams dreamed on the birthday eve should be remembered, for they are predictions of the future brought by the guardian spirits which hover over one’s bed on the birthday eve. Birthday greetings have power for good or ill because one is closer to the spirit world on this day. Good wishes bring good fortune, but the reverse is also true, so one should avoid enemies on one’s birthday and be surrounded only by well-wishers. “Happy birthday” and Many (more) happy returns of the day” are the traditional greetings”, -[The Lore of Birthdays, Linton, p. 20]… 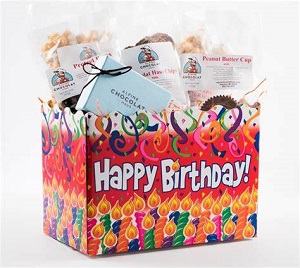 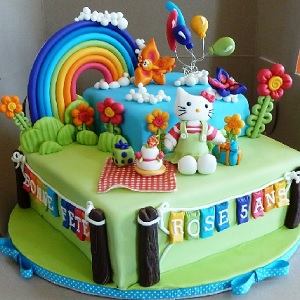 The traditional birthday cake and candles also have their origin in ancient pagan idol worship. The ancients believed that the fire of candles had magical properties. They offered prayers and made wishes to be carried to the gods on the flames of the candles. Thus we still have the widely practiced birthday custom of making a wish, then blowing out the candles. The Greeks celebrated the birthday of their moon goddess, Artemis, with cakes adorned with lighted candles…” -[Should Christians Celebrate Birthdays?: Do Birthdays Have Pagan Origins?, Bob Theil].

Jeremiah 7:18-20 The children gather wood, and the fathers kindle the fire, and the women knead [their] dough, to make cakes to the queen of heaven, and to pour out drink offerings unto other gods, that they may provoke me to anger. Do they provoke me to anger? saith the LORD: [do they] not [provoke] themselves to the confusion of their own faces? Therefore thus saith the Lord GOD; Behold, mine anger and my fury shall be poured out upon this place, upon man, and upon beast, and upon the trees of the field, and upon the fruit of the ground; and it shall burn, and shall not be quenched.

Candles are placed on birthday cakes in order to ward off evils. 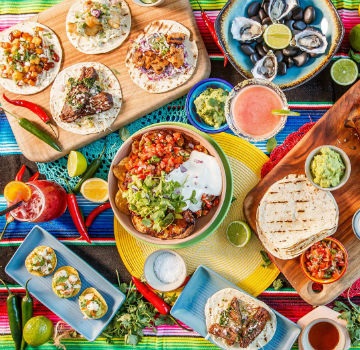 “Nay, indeed, the law does not permit us to make festivals at the birth of our children, and thereby afford occasion of drinking to excess,” [Josephus. Translated by W. Whiston. Against Apion, Book II, Chapter 26. Extracted from Josephus Complete Works, Kregel Publications, Grand Rapids (MI), 14th printing, 1977, p. 632].

Isaiah 22:13 And behold joy and gladness, slaying oxen, and killing sheep, eating flesh, and drinking wine: let us eat and drink; for to morrow we shall die. 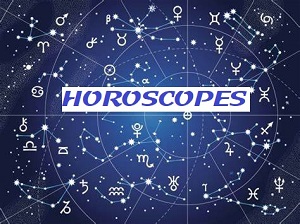 “The Egyptians discovered to which of the gods each month and day is sacred; and found out from the day of a man’s birth, what he will meet with in the course of his life, and how he will end his days, and what sort of man he will be,” [Herodotus, Persian Wars, Book II, ch. 82].

“Since it was believed that the positions of the stars at the time of birth influenced a child’s future, astrological horoscopes came into being, purporting to foretell the future, based on the time of birth. “Birthdays” are intimately linked with the stars, since without the calendar, no one could tell when to celebrate his birthday. They are also indebted to the stars in another way, for in early days the chief importance of birthday records was to enable the astrologers to chart horoscopes,” [The Lore of Birthdays, p. 53].

“The Greeks believed that everyone had a protective spirit or DAEMON(jinn) who attended his birth and watched over him in life. This spirit had a mystic relation with the god on whose birthday the individual was born”.“The Lore of Birthdays” (New York, 1952) by Ralph and Adelin Linton, on pages 8, 18-20

“…of all the holy people in the Scriptures, no one is recorded to have kept a feast or held a great banquet on his birthday. It is only sinners (like Pharaoh and Herod) who make great rejoicings over the day on which they were born into this world below” -[Origen, in Levit., Hom. VIII, in Migne P.G., XII, 495) (Thurston H. Natal Day. Transcribed by Thomas M. Barrett. Dedicated to Margaret Johanna Albertina Behling Barrett. The Catholic Encyclopedia, Volume X. Copyright 1911 by Robert Appleton Company. Online Edition Copyright 2003 by K. Knight. Nihil Obstat, October 1, 1911. Remy Lafort, S.T.D., Censor. Imprimatur. +John Cardinal Farley, Archbishop of New York].

“It is thought that the large-scale celebration of birthdays in Europe began with the cult of Mithras, which originated in Persia but was spread by soldiers throughout the Roman Empire. Before this, such celebrations were not common; and, hence, practices from other contexts such as the Saturnalia were adapted for birthdays. Because many Roman soldiers took to Mithraism, it had a wide distribution and influence throughout the empire until it was supplanted by Christianity.”

“Christmas is also relevant because December 25th was the day of celebration of the birthday of the sun-god Mithra. Perhaps it should also be mentioned that one of the key features of Mithraism was Sunday observance. The reason that this seems to be relevant is that the Roman Emperor Constantine, the first Roman Emperor to make a profession of Christ, was also the first Emperor to make Sunday laws–which he began to do on March 7, 321. Also, a few years later, the Council of Nicea that Constantine convened in 325 A.D. declared Sunday to be the “Christian day” of worship (for more information, please see the article Europa and the Book of Revelation).”

“According to the fourth century historian Epiphanius, some who observed Passover on the fourteenth day of the first month, claimed that Emperor Constantine mandated a Sunday observance of it in the Council of Nicea in 325 in order to somehow honor his birthday,” -[Should Christians Celebrate Birthdays?: Do Birthdays Have Pagan Origins?, Bob Theil]:

“Christmas…In 354 A.D., Bishop Liberius of Rome ordered the people to celebrate on December 25. He probably chose this date because the people of Rome already observed it as the Feast of Saturn, celebrating the birthday of the sun (Sechrist E.H. Christmas. World Book Encyclopedia, Volume 3. Field Enterprises Educational Corporation, Chicago, 1966, pp. 408-417).

“Hence, it would seem to follow that since those who professed Christ as late as the third century did not celebrate birthdays, that it was not after a Roman Emperor implemented Sunday, that perhaps he and others were amenable to adopting other practices of Mithraism–one of which was birthday celebrations. This is apparently how birthdays became to be celebrated amongst those that professed Christianity. A celebration for the date of Jesus’ birth in Rome probably began near this time, but was mandated no later than 354 A.D.”

“Thus the “birthday of the sun” festivities were a major factor in the date chosen for followers of Greco-Roman Christianity to celebrate. And once those that professed Christ began to widely celebrate that “birthday”, other birthday celebrations became more common,” -[Should Christians Celebrate Birthdays?: Do Birthdays Have Pagan Origins?, Bob Theil].

The highest of all holidays in the Satanic religion is the date of one’s own birthday. This is in direct contradiction to the holy of holy days of other religions, which deify a particular god who has been created in an anthropomorphic form of their own image, thereby showing that the ego is not really buried. The Satanist feels: ‘Why not really be honest and if you are going to create a god in your image, why not create that god as yourself.” (Anton Szandor LaVey, (Air) Book of Lucifer – The Enlightenment, Avon Books, 1969, Ch XI, “Religious Holidays,” p. 96)

“But should we be following the example of the Romans who mixed practices of Mithraism into their religion or of those who first accepted Christ?, “-[Should Christians Celebrate Birthdays?: Do Birthdays Have Pagan Origins?, Bob Theil]

“Whoever imitates a people is from them,” -[Sunan Abu Dawud].