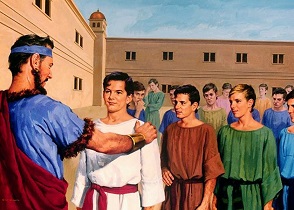 Daniel and his friends

Who is Daniel?
Daniel 1:1 In the third year of the reign of Jehoiakim king of Judah came Nebuchadnezzar king of Babylon unto Jerusalem, and besieged it.

Note: Daniel is one of the captives taken by Babylonians when they besieged Jerusalem.

Daniel 1:4 Children in whom [was] no blemish, but well favoured, and skilful in all wisdom, and cunning in knowledge, and understanding science, and such as [had] ability in them to stand in the king's palace, and whom they might teach the learning and the tongue of the Chaldeans.

Daniel was selected as one of the wise men to stand in the king’s palace.

Who was with him?
Daniel 1:6-7 Now among these were of the children of Judah, Daniel, Hananiah, Mishael, and Azariah:  Unto whom the prince of the eunuchs gave names: for he gave unto Daniel [the name] of Belteshazzar; and to Hananiah, of Shadrach; and to Mishael, of Me-shach; and to Azariah, of Abednego.

Where were they?
Daniel 1:1 In the third year of the reign of Jehoiakim king of Judah came Nebuchadnezzar king of Babylon unto Jerusalem, and besieged it.

Why were they sent into captivity?
Jeremiah 25:4-9, “And the LORD hath sent unto you all his servants the prophets, rising early and sending [them]; but ye have not hearkened, nor inclined your ear to hear. They said, Turn ye again now every one from his evil way, and from the evil of your doings, and dwell in the land that the LORD hath given unto you and to your fathers for ever and ever: And go not after other gods to serve them, and to worship them, and provoke me not to anger with the works of your hands; and I will do you no hurt. Yet ye have not hearkened unto me, saith the LORD; that ye might provoke me to anger with the works of your hands to your own hurt. Therefore thus saith the LORD of hosts; Because ye have not heard my words, Behold, I will send and take all the families of the north, saith the LORD, and Nebuchadrezzar the king of Babylon, my servant, and will bring them against this land, and against the inhabitants thereof, and against all these nations round about, and will utterly destroy them, and make them an astonishment, and an hissing, and perpetual desolations.”

Sent prophets to hearken unto His voice
The purpose: To turn from evil ways
What evil ways:   To stop going after other gods to serve them, and to worship them (Exodus 20:3, “Thou shalt have no other gods before me.”)
They did not repent, but they provoked God and therefore, Jeremiah prophesied their captivity.
Sent into Babylon

Where is this located?
Middle of Iraq from what scolars say

What does BC mean?Before Christ was born

What were their tests?
Daniel 1:5 And the king appointed them a daily provision of the king's meat, and of the wine which he drank: so nourishing them three years, that at the end thereof they might stand before the king.

What was their choice regarding the king’s provision?
>Daniel 1:8 But Daniel purposed in his heart that he would not defile himself with the portion of the king's meat, nor with the wine which he drank: therefore he requested of the prince of the eunuchs that he might not defile himself.

What did he choose to eat instead?
Daniel 1:12 Prove thy servants, I beseech thee, ten days; and let them give us pulse to eat, and water to drink.

What was the result of their obedience to the laws of health?
Daniel 1:15, 17, 19-20 And at the end of ten days their countenances appeared fairer and fatter in flesh than all the children which did eat the portion of the king's meat.  As for these four children, God gave them knowledge and skill in all learning and wisdom: and Daniel had understanding in all visions and dreams. And the king communed with them; and among them all was found none like Daniel, Hananiah, Mishael, and Azariah: therefore stood they before the king. And in all matters of wisdom [and] understanding, that the king inquired of them, he found them ten times better than all the magicians [and] astrologers that [were] in all his realm.

What was one of his characteristics?

Daniel 6:10 Now when Daniel knew that the writing was signed, he went into his house; and his windows being open in his chamber toward Jerusalem, he kneeled upon his knees three times a day, and prayed, and gave thanks before his God, as he did aforetime.

So because they were obedient to God, kept His laws of health, lived a prayerful life, what could God do with them?
Daniel 2:28 But there is a God in heaven that revealeth secrets… How did God reveal His secrets?

Daniel 2:29-30    As for thee, O king, thy thoughts came [into thy mind] upon thy bed, what should come to pass hereafter: and he that revealeth secrets maketh known to thee what shall come to pass. But as for me, this secret is not revealed to me for [any] wisdom that I have more than any living, but for [their] sakes that shall make known the interpretation to the king, and that thou mightest know the thoughts of thy heart.

Daniel 1:17 As for these four children, God gave them knowledge and skill in all learning and wisdom: and Daniel had understanding in all visions and dreams.

What was God able to do for them for their obedience?
They were able to gain knowledge, wisdom and understanding regarding spiritual things, especially prophecy or things that will come to pass in future time.