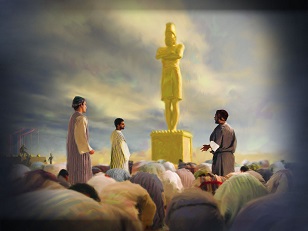 The Great Image in the Dream of Nebuchadnezzar

Object: To understand that in the days of old the loyalty of God’s people were tested and it will be the same today where our loyalty will be tested as well

The prince of this world offered and demanded what from Jesus?
Matthew  4:8-9 4:8 Again, the devil taketh him up into an exceeding high mountain, and showeth him all the kingdoms of the world, and the glory of them; And saith unto him, All these things will I give thee, if thou wilt fall down and worship me.

Satan controls the kingdom of this earth and he demanded worship

Back to the dream of Nebuchadnezzar
Daniel  2:31 Thou, O king, sawest, and behold a great image. This great image, whose brightness [was] excellent, stood before thee; and the form thereof [was] terrible.

Who were God’s people in Babylon during the reign of Nebuchadnezzar?
Daniel 2:49 Then Daniel requested of the king, and he set Shadrach, Meshach, and Abednego, over the affairs of the province of Babylon: but Daniel [sat] in the gate of the king.

What did the king build after his dream?
Daniel 3:1 Nebuchadnezzar the king made an image of gold, whose height [was] threescore cubits, [and] the breadth thereof six cubits: he set it up in the plain of Dura, in the province of Babylon.

What happened to those who will not worship the image?
Daniel 3:6 And whoso falleth not down and worshippeth shall the same hour be cast into the midst of a burning fiery furnace.

Did Daniel’s 3 friends worship the image?
Daniel 3:18 But if not, be it known unto thee, O king, that we will not serve thy gods, nor worship the golden image which thou hast set up.

Were Shadrach, Meshach, and Abednego hurt?
Daniel 3:27 And the princes, governors, and captains, and the king's counsellors, being gathered together, saw these men, upon whose bodies the fire had no power, nor was an hair of their head singed, neither were their coats changed, nor the smell of fire had passed on them.

The loyalty of God’s people in the last days will be tested. Our little golden image of today is here. Are we going to worship God on His Sabbath day? Or worship man in his counterfeit day of worship on Sunday? Today, we still have freedom and nobody can force us yet to worship another day but soon, our great golden image is coming where everyone will have to finally decide. On this, men will be FORCED to worship the counterfeit day. We will study deeper about this topic called the Mark of the Beast.