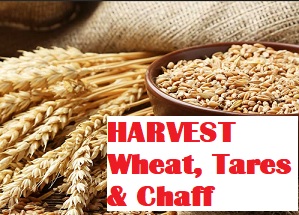 Matthew 13:24-30 Another parable put he forth unto them, saying, The kingdom of heaven is likened unto a man which sowed good seed in his field: But while men slept, his enemy came and sowed tares among the wheat, and went his way. But when the blade was sprung up, and brought forth fruit, then appeared the tares also. So the servants of the householder came and said unto him, Sir, didst not thou sow good seed in thy field? from whence then hath it tares? He said unto them, An enemy hath done this. The servants said unto him, Wilt thou then that we go and gather them up? But he said, Nay; lest while ye gather up the tares, ye root up also the wheat with them. Let both grow together until the harvest: and in the time of harvest I will say to the reapers, Gather ye together first the tares, and bind them in bundles to burn them: but gather the wheat into my barn.

What does this parable mean? The Word of God will teach us regarding this matter. First, let us pick the important elements of this parable.

Who is the sower of the good seed?
Matthew 13:37 He answered and said unto them, He that soweth the good seed is the Son of man;

Jesus Christ, the Son of man is the one who sowed the good seed.

Therefore, the good seed is the incorruptible Word fo God embraced and accepted by His failtful children. Now let us find out who the bad seeds are.

If the good seed is the incorruptible Word of God, the bad seed is the opposite. It is the corrupt words and teachings of Satan accepted by his children.

During the harvest gathering, two classes will be formed. The good seed in one side and the bad seed in the other side. The children of God versus the children of Satan.

Who is the wicked one?
Matthew 13:39 The enemy that sowed them is the devil; the harvest is the end of the world; and the reapers are the angels.

2 Corinthians 11:14 And no marvel; for Satan himself is transformed into an angel of light.
11:15 Therefore [it is] no great thing if his ministers also be transformed as the ministers of righteousness; whose end shall be according to their works.

Matthew 7:15 Beware of false prophets, which come to you in sheep's clothing, but inwardly they are ravening wolves.

When will the enemy sow bad seeds?
Matthew 13:25 But while men slept, his enemy came and sowed tares among the wheat, and went his way.

What is sleep?
1 Thess 5:6 Therefore let us not sleep, as [do] others; but let us watch and be sober. 5:7 For they that sleep sleep in the night; and they that be drunken are drunken in the night.

The watchmen who are sleeping are those who are drunk, not watching out and are in darkness. These kind of watchmen will find themselves be overtaken by the falsehood and lies of Satan. The enemy is ready to infiltrate and enter if the watchmen on the walls give an inch of drunkeness and carelessness. The people of God cannot for a moment loose their guard. We had been warned many times what we need to do.

Luke 21:36 Watch ye therefore, and pray always, that ye may be accounted worthy to escape all these things that shall come to pass, and to stand before the Son of man.

Revelation 16:15 Behold, I come as a thief. Blessed [is] he that watcheth, and keepeth his garments, lest he walk naked, and they see his shame.

Luke 21:34 And take heed to yourselves, lest at any time your hearts be overcharged with surfeiting, and drunkenness, and cares of this life, and [so] that day come upon you unawares.

The field is the world where the truth and errors are being placed together for people to choose from. This world is the battlefield where everyone must choose between truth or lies between the Word of God or the mouth of Satan.

THE REAPERS:
Matthew 13:39 ..and the reapers are the angels.

The angels are the reapers who are the messengers of God that He uses to carry a message or mission to earth.

Let us define the word WORLD. Is it the planet earth we are living today? Or is it something else?

from the same as 104; properly, an age; by extension, perpetuity (also past); by implication, the world; specially (Jewish) a Messianic period (present or future):--age, course, eternal, (for) ever(-more), (n-)ever, (beginning of the , while the) world (began, without end).

How do these angels reap? Are there going to be literal angels to do the harvest?
Revelation 14:6-9 And I saw another angel fly in the midst of heaven, having the everlasting gospel to preach unto them that dwell on the earth, and to every nation, and kindred, and tongue, and people, Saying with a loud voice... And there followed another angel, saying... And the third angel followed them, saying with a loud voice...

Revelation 18:4 And I heard another voice from heaven, saying, Come out of her, my people, that ye be not partakers of her sins, and that ye receive not of her plagues.

The reaping of the angels or the messengers of God which represents also His people is done by voice, with a loud voice we are to proclaim the messages into all around us. The reaping of the harvest uses a sickle which is our mouth that we can use to spread the 3 angels messages. We do not see literal angels walking around this world preaching the 3 messages of Revelation 14. But God needs His people to do something to gather souls for His Kingdom for no slothful servant is allowed to enter into the kingdom of God. Matthew 25:26

What is the end result of this harvest or the gathering of souls?
Matthew 13:30 Let both grow together until the harvest: and in the time of harvest I will say to the reapers, Gather ye together first the tares, and bind them in bundles to burn them: but gather the wheat into my barn.

There will be 2 classes of people that will be formed as a result of the harvest or the gathering time. There is the wheat and there is the tares. This is also illustrated in another area of the Bible.

Matthew 25:32 And before him shall be gathered all nations: and he shall separate them one from another, as a shepherd divideth [his] sheep from the goats: 25:33 And he shall set the sheep on his right hand, but the goats on the left.

The CHAFF
This is from the wheat. These are those who are part of the wheat grains yet there is no sap or meat inside it's shell. When the wind blows, they blow too and are taken where the direction of the wind takes them. Since they are part of the wheat harvest, they are brought into the threshingfloor. They accept the truth yet they fail to walk in it so when the wind of persecutions and trials come, they blow away where the wind takes them.

Job 21:18 They are as stubble before the wind, and as chaff that the storm carrieth away.


Psalms 1:4 The ungodly [are] not so: but [are] like the chaff which the wind driveth away.

Daniel 2:35 ...and became like the chaff of the summer threshingfloors; and the wind carried them away,


Matthew 15:8 This people draweth nigh unto me with their mouth, and honoureth me with [their] lips; but their heart is far from me. 23:27 Woe unto you, scribes and Pharisees, hypocrites! for ye are like unto whited sepulchres, which indeed appear beautiful outward, but are within full of dead [men's] bones, and of all uncleanness.


The chaff are those who know the truth yet fail to apply or walk in the truth that has the power to sanctify them. John 17:17 the truth can only sanctify if we obey and apply it in our lives.

In this harvest season, Jesus Christ is the leader in the harvest.

Revelation 14:14 And I looked, and behold a white cloud, and upon the cloud [one] sat like unto the Son of man, having on his head a golden crown, and in his hand a sharp sickle. 14:15 And another angel came out of the temple, crying with a loud voice to him that sat on the cloud, Thrust in thy sickle, and reap: for the time is come for thee to reap; for the harvest of the earth is ripe.

At the same time, an angel will harvest the wicked.
Revelation 14:17 And another angel came out of the temple which is in heaven, he also having a sharp sickle. 14:18 And another angel came out from the altar, which had power over fire; and cried with a loud cry to him that had the sharp sickle, saying, Thrust in thy sharp sickle, and gather the clusters of the vine of the earth; for her grapes are fully ripe. 14:19 And the angel thrust in his sickle into the earth, and gathered the vine of the earth, and cast [it] into the great winepress of the wrath of God.

Therefore, if we put the harvest message in a chart and where it must happen, we see the truth below.

So, in closing, the harvest started at the end of the world in 1844 where 3 angels messages came to the world to harvest the wheat and the tares. Those who accepted the seed of truth of the 3 angels messages are being gathered and harvested and bundled as the wheat ready to be kept in the barn when probation closes. Those who rejected the truth but embrace the lies of Satan will be gathered as well and bundled as the tares who are ready to face the winepress of the wrath of God after probation closes. Those who are harvested with the wheat yet failed to walk in the truth will blow with the wind as chaff and will be burned with the tares.