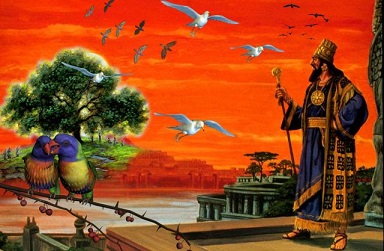 Matthew 13:32, "Which indeed is the least of all seeds: but when it is grown, it is the greatest among herbs, and becometh a tree, so that the birds of the air come and lodge in the branches thereof."

Jeremiah 27:6-11, “And now have I given all these lands into the hand of Nebuchadnezzar the king of Babylon, my servant; and the beasts of the field have I given him also to serve him. And all nations shall serve him, and his son, and his son's son, until the very time of his land come: and then many nations and great kings shall serve themselves of him. And it shall come to pass, [that] the nation and kingdom which will not serve the same Nebuchadnezzar the king of Babylon, and that will not put their neck under the yoke of the king of Babylon, that nation will I punish, saith the LORD, with the sword, and with the famine, and with the pestilence, until I have consumed them by his hand. Therefore hearken not ye to your prophets, nor to your diviners, nor to your dreamers, nor to your enchanters, nor to your sorcerers, which speak unto you, saying, Ye shall not serve the king of Babylon: For they prophesy a lie unto you, to remove you far from your land; and that I should drive you out, and ye should perish. But the nations that bring their neck under the yoke of the king of Babylon, and serve him, those will I let remain still in their own land, saith the LORD; and they shall till it, and dwell therein.”

Daniel 4:1-5, “Nebuchadnezzar the king, unto all people, nations, and languages, that dwell in all the earth; Peace be multiplied unto you. I thought it good to show the signs and wonders that the high God hath wrought toward me. How great [are] his signs! and how mighty [are] his wonders! his kingdom [is] an everlasting kingdom, and his dominion [is] from generation to generation. I Nebuchadnezzar was at rest in mine house, and flourishing in my palace: I saw a dream which made me afraid, and the thoughts upon my bed and the visions of my head troubled me.”

Daniel 4:8-9, “But at the last Daniel came in before me, whose name [was] Belteshazzar, according to the name of my god, and in whom [is] the spirit of the holy gods: and before him I told the dream, [saying], O Belteshazzar, master of the magicians, because I know that the spirit of the holy gods [is] in thee, and no secret troubleth thee, tell me the visions of my dream that I have seen, and the interpretation thereof.”

Daniel 4:10-18, “Thus [were] the visions of mine head in my bed; I saw, and behold, a tree in the midst of the earth, and the height thereof [was] great. The tree grew, and was strong, and the height thereof reached unto heaven, and the sight thereof to the end of all the earth: The leaves thereof [were] fair, and the fruit thereof much, and in it [was] meat for all: the beasts of the field had shadow under it, and the fowls of the heaven dwelt in the boughs thereof, and all flesh was fed of it. I saw in the visions of my head upon my bed, and, behold, a watcher and an holy one came down from heaven; He cried aloud, and said thus, Hew down the tree, and cut off his branches, shake off his leaves, and scatter his fruit: let the beasts get away from under it, and the fowls from his branches: Nevertheless leave the stump of his roots in the earth, even with a band of iron and brass, in the tender grass of the field; and let it be wet with the dew of heaven, and [let] his portion [be] with the beasts in the grass of the earth: Let his heart be changed from man's, and let a beast's heart be given unto him: and let seven times pass over him. This matter [is] by the decree of the watchers, and the demand by the word of the holy ones: to the intent that the living may know that the most High ruleth in the kingdom of men, and giveth it to whomsoever he will, and setteth up over it the basest of men. This dream I king Nebuchadnezzar have seen. Now thou, O Belteshazzar, declare the interpretation thereof, forasmuch as all the wise [men] of my kingdom are not able to make known unto me the interpretation: but thou [art] able; for the spirit of the holy gods [is] in thee.”

Daniel 4:20-23, “The tree that thou sawest, which grew, and was strong, whose height reached unto the heaven, and the sight thereof to all the earth; Whose leaves [were] fair, and the fruit thereof much, and in it [was] meat for all; under which the beasts of the field dwelt, and upon whose branches the fowls of the heaven had their habitation: It [is] thou, O king, that art grown and become strong: for thy greatness is grown, and reacheth unto heaven, and thy dominion to the end of the earth. And whereas the king saw a watcher and an holy one coming down from heaven, and saying, Hew the tree down, and destroy it; yet leave the stump of the roots thereof in the earth, even with a band of iron and brass, in the tender grass of the field; and let it be wet with the dew of heaven, and [let] his portion [be] with the beasts of the field, till seven times pass over him;”

Daniel 4:24-26, “This [is] the interpretation, O king, and this [is] the decree of the most High, which is come upon my lord the king: That they shall drive thee from men, and thy dwelling shall be with the beasts of the field, and they shall make thee to eat grass as oxen, and they shall wet thee with the dew of heaven, and seven times shall pass over thee, till thou know that the most High ruleth in the kingdom of men, and giveth it to whomsoever he will. And whereas they commanded to leave the stump of the tree roots; thy kingdom shall be sure unto thee, after that thou shalt have known that the heavens do rule.”

Psalms 7:9-10, "Oh let the wickedness of the wicked come to an end; but establish the just: for the righteous God trieth the hearts and reins. My defence [is] of God, which saveth the upright in heart."

Daniel 4:27, “Wherefore, O king, let my counsel be acceptable unto thee, and break off thy sins by righteousness, and thine iniquities by showing mercy to the poor; if it may be a lengthening of thy tranquillity.”

Daniel 4:28, “All this came upon the king Nebuchadnezzar.”

Daniel 4:29, “At the end of twelve months he walked in the palace of the kingdom of Babylon.”

Daniel 4:30, “The king spake, and said, Is not this great Babylon, that I have built for the house of the kingdom by the might of my power, and for the honour of my majesty?”

Matthew 15:18, "But those things which proceed out of the mouth come forth from the heart; and they defile the man."

Daniel 4:31-32, “While the word [was] in the king's mouth, there fell a voice from heaven, [saying], O king Nebuchadnezzar, to thee it is spoken; The kingdom is departed from thee. And they shall drive thee from men, and thy dwelling [shall be] with the beasts of the field: they shall make thee to eat grass as oxen, and seven times shall pass over thee, until thou know that the most High ruleth in the kingdom of men, and giveth it to whomsoever he will.”

Galatians 6:7, "Be not deceived; God is not mocked: for whatsoever a man soweth, that shall he also reap."

Daniel 4:33, “The same hour was the thing fulfilled upon Nebuchadnezzar: and he was driven from men, and did eat grass as oxen, and his body was wet with the dew of heaven, till his hairs were grown like eagles' [feathers], and his nails like birds' [claws].”

Isaiah 55:11-12, "So shall my word be that goeth forth out of my mouth: it shall not return unto me void, but it shall accomplish that which I please, and it shall prosper [in the thing] whereto I sent it. For ye shall go out with joy, and be led forth with peace: the mountains and the hills shall break forth before you into singing, and all the trees of the field shall clap [their] hands."

Daniel 4:34-35, “And at the end of the days I Nebuchadnezzar lifted up mine eyes unto heaven, and mine understanding returned unto me, and I blessed the most High, and I praised and honoured him that liveth for ever, whose dominion [is] an everlasting dominion, and his kingdom [is] from generation to generation: And all the inhabitants of the earth [are] reputed as nothing: and he doeth according to his will in the army of heaven, and [among] the inhabitants of the earth: and none can stay his hand, or say unto him, What doest thou?”

Daniel 4:37, “Now I Nebuchadnezzar praise and extol and honour the King of heaven, all whose works [are] truth, and his ways judgment: and those that walk in pride he is able to abase.”

Daniel 2:21-22, "And he changeth the times and the seasons: he removeth kings, and setteth up kings: he giveth wisdom unto the wise, and knowledge to them that know understanding: He revealeth the deep and secret things: he knoweth what [is] in the darkness, and the light dwelleth with him."

Revelation 12:17, “And the dragon was wroth with the woman, and went to make war with the remnant of her seed, which keep the commandments of God, and have the testimony of Jesus Christ.”

Daniel 4:33, "The same hour was the thing fulfilled upon Nebuchadnezzar: and he was driven from men, and did eat grass as oxen..."